Editor’s note: We are trying to help out a local Dallas site to promote an event in the DFW area. The following was originally posted on BigFanBoy.com and is being hosted by site runner Mark Walters at the Irving Convention Center.

As we are going to start helping them out more regularly we wanted to let you all know about the great fan based events and conventions happening throughout the year. We’re also going to be doing some red carpet interviews so look out for us on the press line talking to some of the visiting talent. 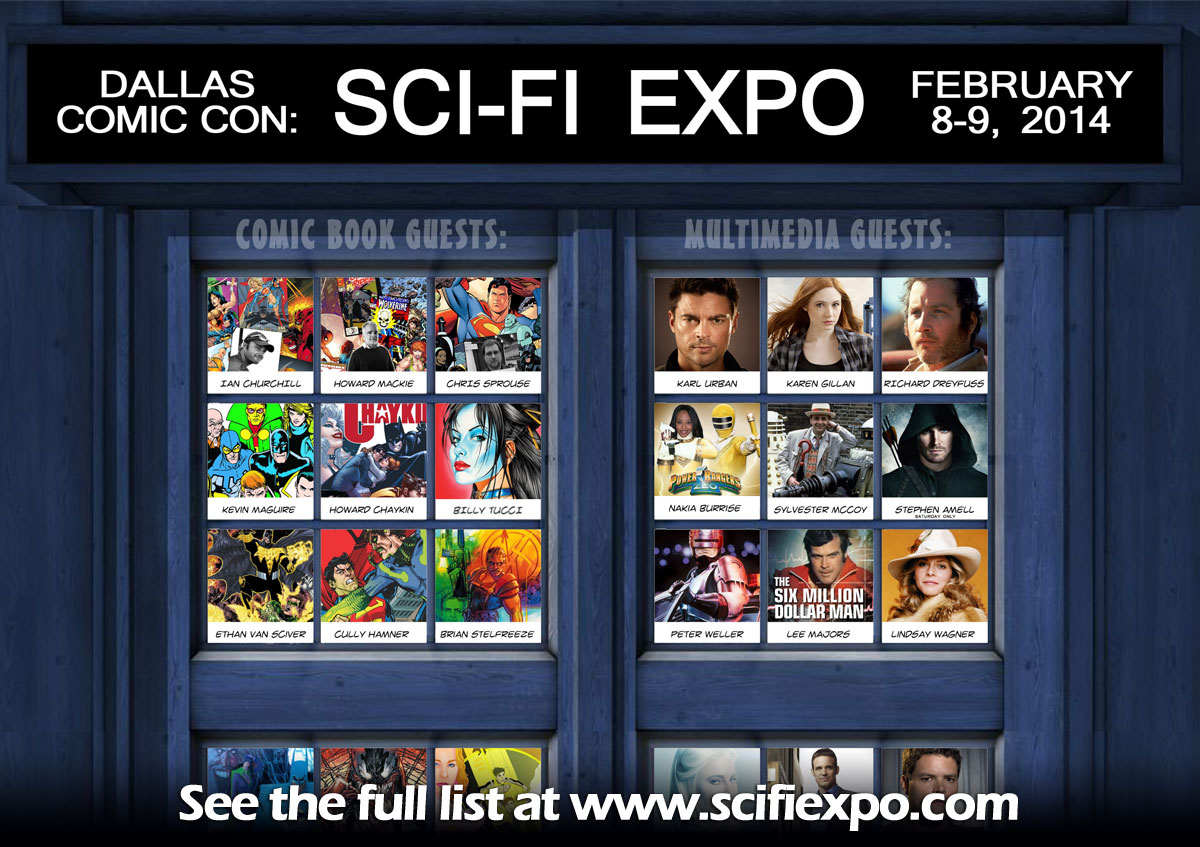 This weekend DFW fans of pop culture and sci-fi are going to have a real treat at the Sci-Fi Expo descends on the Irving Convention Center. Hosted by the same men behind the Dallas Comic Con, the Sci-Fi Expo features a wide variety of actors from popular movies and TV shows, along with an impressive list of comic book creators. Promising a fun-filled and family environment, this show is a chance for passionate fanboys and fangirls to meet their heroes in a two-day festival featuring Q&A panels all weekend. Bigfanboy.com will also be set up on the third floor giving away tons of movie-related freebies to fans both days of the show. Check out the full press release below, and visit SciFiExpo.com for a full guest list and complete information. The show runs Saturday 11am to 7pm, and Sunday 11am to 5pm.

Oscar-winning actor Richard Dreyfuss tops a long list of actors and artists appearing at Dallas Comic Con’s Sci-Fi Expo on Feb. 8 & 9 at the Irving Convention Center. The star of such well-known films as The Goodbye Girl, American Graffiti, Jaws, Close Encounters of the Third Kind and Mr. Holland’s Opus will talk about his long-running career during a Q&A panel on Saturday.

“We are honored to have an actor of Mr. Dreyfuss’ caliber at our upcoming expo,” said Ben Stevens, co-owner of C2Ventures, which produces Dallas Comic Con. “Of course, he’s just one of many on our guest list, which reads like a ‘Who’s Who’ in television and films.”

They include Karl Urban, who portrayed “Dr. Leonard ‘Bones’ McCoy” in J.J. Abrams’ Star Trek and Star Trek Into Darkness; and Stephen Amell, star of the CW-TV hit series Arrow, based on the “Green Arrow” comic books. Fans of the long-running British TV series Doctor Who can meet Sylvester McCoy, the seventh doctor in the series who also starred in the 1996 Doctor Who television movie. Also appearing will be Karen Gillan, who played “Amy Pond” on the Doctor Who series and portrays “Nebula” in the soon-to-be-released Guardians of the Galaxy, based on the Marvel comic book.

The actors will sign autographs, meet fans and answer questions during special panels, as well as pose with fans during professional photo sessions. All actors are scheduled to appear both days except Mr. Amell and Ms. Gillan, who appear Saturday only.

The Expo’s artist alley will feature some of the comic industry’s top creators, including a rare U.S. appearance by Eisner-nominated artist Ian Churchill. His work includes Coven, Supergirl, Uncanny X-Men and his creator-owned comic Marineman.

“We have an absolutely amazing mix of comic book creators at this show,” said Event Manager Mark Walters. “These are some of the most talented artists working today, and they’re responsible for some of the biggest books out there.”

Other events include adult and children costume contests, special effects make-up workshops, a Cosplay Red Carpet, and hundreds of vendors and exhibitors.

The Irving Convention Center is at 500 W. Las Colinas Blvd., in Irving, Texas. Show hours are 11 a.m. to 7 p.m. Saturday, and 11 a.m. to 5 p.m. Sunday. The box office opens two hours prior to show time on Saturday and one hour prior on Sunday.

Tickets are $35 Saturday, $25 Sunday and $50 for a two-day pass. Children’s tickets for ages 5 to 12 are $5, and ages 4 and under are free. All children must be accompanied by an adult. Parking is $5, with shuttles provided for extended lots.

Tickets are available online through Feb. 5. To pre-order tickets or for more information, please visitwww.scifiexpo.com.