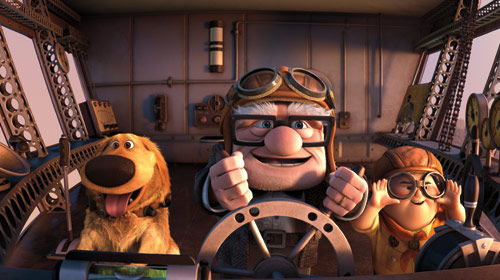 Blue Sky Studios and 20th Century Fox are bringing Chris Wedge’s EPIC to theaters this weekend. It’s a visual wonderland that is perfectly complimented by Danny Elfman’s beautiful score. So it was with that in mind we decided to look at a variety of beloved films that feature equally gorgeous animation and take us to worlds too incredible to believe. Yet while the four titles above are vastly different at first glance they do share one common element; a standout musical score that is as vibrant as any hand-painted or computer generated cells in each of these fantastic stories.

So who will walk away with the crown in today’s FourScore match-up? Is it the story of a boy destined to follow in his father’s footsteps, is the wandering wizard in need of some purpose, is it the lovably grumpy old man determined to keep a promise to his wife, or is it the hybrid whodunit featuring everyone’s speech challenged rabbit? Find out below… , Steve Jablonsky seems right at home in Katsushiro Otomo’s steam-powered version of 1860’s Britain. It is a wondrous delight but one that would seem very flat were it not for Jablonsky adding his signature sound, which is some of his most epic music to date (yes even bigger than the sound of Transformers duking it out). Sounding similar to The Rocketeer it packs the punch that the narrative itself lacks. But while the story may meander, the last 20 minutes are nothing short of spellbinding thanks largely to the orchestral accompaniment of Jablonsky’s energetic and riveting score.

(Favorite Tracks: Ray’s Theme, The Chase and Collapse and Rescue ) universe and a frequent collaborator to the legendary Hayao Miyazaki. The story of Howl might be a little nonsensical but Hisaishi’s compositions are perhaps his finest and most compelling work to date. The European sounding theme embodies a fanciful and colorful vitality that easily weaves in, out and around the vibrant characters as Hisaishi casts his own brand of magic to compliment the onscreen witches, wizards and endless visual delights. It’s also his catchiest, most heartfelt effort and one that, unlike Nausicaä or even Castle In the Sky, has a timeless sound as opposed to a dated one.

(Favorite Tracks: The individual tracks of the score are great but this Suite is exceptional) received, and then some. If there’s one composer who can keep his head in the air and his feet on the ground at the same time, it’s Giacchino. His knack for composing such simple but affecting themes is nearly unrivaled and he is able to connect the characters on screen to the people in the theater on a level on par with Jerry Goldsmith. Case in point, his theme “Married Life”. People give Pete Docter flack for making grown men across the country cry in the opening of the film, but really Michael is mostly at fault. But then he can turn on a dime and make us forget the tears as we are swept up in the whimsy, delight and adventure of the unlikely trio, well foursome, of Carl, Russell, Kevin and Dug.

(Favorite Tracks: The Small Mailman Returns, The Ellie Badge and Up WIth End Credits)

Who Framed Roger Rabbit – Alan Silvestri has created so many iconic themes and this is one of his most underrated but also one of his very best. The sound Silvestri created perfectly blends a noir film with a family comedy (to match the theme of the the film obviously); the result of which is a light-hearted fare that oozes with tangible nostalgia. It’s a score that runs the gamut giving depth to a variety of, pardon the pun, animated characters, from the free-spirited Roger Rabbit, the melancholy Eddie Valiant to the towering (and nearly frightening) Judge Doom. Alan Silvestri, like hie did with Back to the Future, nailed this score which is about as cool as you can get without being Miles Davis.

To chose a winner for this particular FourScore is not an easy task. At the end of the day any choice is a subjective one and further likened to comparing apples to oranges – one is not necessarily better than the other, it simply comes down to the taste of the person. Yet again the one thing they have in common is that they are just so damn good. That said, Giacchino won an Oscar for a reason and today takes the win for the variety of emotions he easily conjures with his efforts. All these films have tons of heart and quite a good amount of action and excitement, yet of the four gifted musicians above, Giacchino’s music brings the characters to life with more than just a pulse – he gives them a soul. Giacchino makes music for films small and great, for rats, and Spocks and Supers 8….”That doesn’t even rhyme. Yeah it does!“