Who will direct Star Wars Episode VII? Despite having Michael Arndt on-board for writing duties, Disney still hasn’t picked a director for their continuation of George Lucas’ alternately beloved and maligned space opera franchise. That said, we can now add one more name to the list of people who won’t be at the helm of the sci-fi blockbuster: Guillermo del Toro.

The news comes courtesy of The Playlist, who had the chance to speak with the celebrated genre prince and got a couple of juicy nuggets of info out of him in the process. Normally, I wouldn’t consider this sort of thing news; why bother reporting on one of the people who isn’t going to be directing what will likely end up being one of the biggest films of the decade? But del Toro isn’t just “people”. He’s one of the busiest filmmakers on the planet even at the slowest of times. Combine that sense of industry with his natural amicability and talkativeness and presto– news about the projects he won’t be involved in naturally turns into news about the ones he will be.

So Star Wars Episode VII loses a del Toro and gains a who-knows-who (my guess is Jon Favreau, but what do I know?). In exchange, we get a bunch of original GDT pictures. Sounds like an equitable trade-off to me:

“We got one phone call to my agent saying, ‘Is Guillermo interested?’ And basically I have so much stuff already of my own, and I’m pursuing stuff that I’m generating already…” he said, explaining that he ultimately turned it down.

With numerous directing, producing and writing projects in the works, Del Toro made it clear that his own slate is full enough to keep him occupied, but he was still pleased to be approached. “It was very flattering,” he said, adding: “It was just a phone call, it didn’t go past that, it was very nice to be asked, but believe it or not, I’m busy enough.”

The article contains a couple other neat tidbits of info– GDT would like to have seen Brad Bird at the wheel of the new Star Wars picture, for one, but that’s not going to happen– but truthfully, the point of real interest here lies in the knowledge that del Toro is busy working on del Toro projects. He has his hands in a number of other projects, some of which he’s just serving as a producer (as in the upcoming horror film Mama— watch for our review next week) and some of which he’ll be directing himself– he’ll be following up this summer’s Pacific Rim with a haunted house story, and in theory following that up with a gothic stop motion animated version of Pinocchio.

To top that all off? At the Mountains of Madness isn’t totally off the table anymore, either; emboldened by the fact that Prometheus is nothing like Lovecraft’s iconic text, del Toro is going to give it the old college try and attempt to get the project off the ground once more. This should be especially great news for del Toro diehards for whom the idea of GDT handling Lovecraft is nothing short of sublime– cosmic monsters fit right into his wheelhouse, after all, and if nothing else Pacific Rim should prove that pretty handily.

So there you have it: the mystery person hired to direct Star Wars VII ain’t Guillermo del Toro, but that’s not to say the man will let his hands go idle. 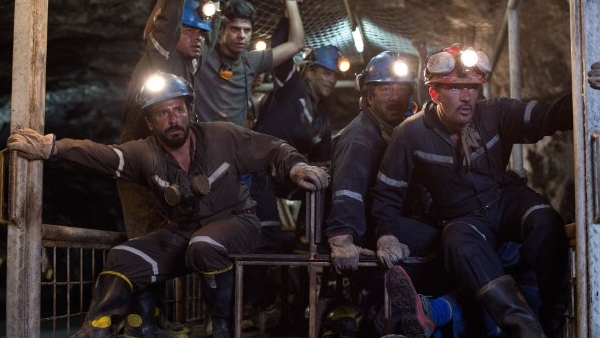 ALL PASSES CLAIMED – Advance Screening Passes to ‘THE 33’ in DALLAS, TX