Being ever so much funnier and engaging than the trailers implied, Due Date, Todd Phillips‘s second road trip movie, proves that he has more up his sleeve than Frank the Tank and a “one man wolf pack“. Personally speaking I really didn’t know what I was in store for aside from his hilarious but brief resume which goes back to 2000’s Road Trip. Call me a less than sophisticated film enthusiast but I’ll take a good laugh riot over a perfect story most days of the week. That said, going into Due Date, did anyone expect the latter from a film that is supposed to the the former? enjoyable variety…well for the viewer at least. Right off the bat this appeared to be a redo of the classic Martin/Candy film Trains, Planes, and Automobiles. With a similar destination, a deadline and few resources, we follow two guys who couldn’t be more opposite thrown together in a fellowship of sorts. But where as the inventiveness of the John Huges’ film title and plot made for a more dynamic trip, Due Date is more focused on forgoing originality for the sake of hilarity and I didn’t mind a bit.

A new spin on a treaded tale, the profound and insane antics are matched only by the chemistry between Zach Galifianakis and Robert Downey Jr. Really it’s so profound that it works. Still it’s a story that’s not necessarily thin but like any road trip is about the journey not the destination. Although I suspect being resent at the birth of your first child is slightly more important than making it home for a holiday that occurs every year. Going for a seemingly more emotional tone than his past efforts, Phillips and screenwriters Alan Freedland, Alan R. Cohen, Adam Sztykiel‘s efforts here resemble the attempts Judd Apatow made towards a heartfelt film when going from The 40 Year Old Virgin to Funny People. FYI, compared to the latter, this is the better product in all categories.

Polar opposites in everything from hygine to style, this odd couple duo works fantastically. Downey, in a Tony Stark-esqe role, plays the straight laced and established architect at one end of the spectrum. The other is occupied by Zack playing the free-wheeling, highly aloof but aspirational struggling actor. Surprisingly the two seemed suited to play opposite one another and their back and forth had more depth than the trailers let on. Downey tries several times to connect and everything, including the sarcasm goes wildly over Zack’s head to hilarious results. High points to Zack as this is a character he is becoming more than comfortable playing (though it doesn’t seem difficult to play). Some dialog felt so legitimate and unrehearsed it gave a sense of realism to their conversations.

Relying less on supporting characters to keep it lively Zack and Jr. take the front seat (driving humor, get it?) but some fun comes in the form of an Oscar Winner, frequent collaborators as well as the film’s director. Danny McBride, Juliette Lewis and a blink and you missed him turn from RZA make for some memorable one liners but Michelle Monaghan (the mom to be) and Jamie Foxx (the suspicious best friend) didn’t hold any water.

If the whole is the sum of the parts, then Due Date fits that description and Zack and Jr. carried the film with very limited help from the supporting cast. Without going overboard up front the laughs were paced well. Writing seemed to be written specifically for Zack and Jr. and played well to their acting styles. Due Date had more than a fair share of gut busting scenes but Phillip’s careful placement of them throughout gave a very even and steady run of humor with little down time for the whole duration. Even the cameos seemed spaced appropriately to allow more time with the two leads and allowed proper amounts of getting to know you time (although I feel we got to know Zack’s Ethan Tremblay a little to well thanks to their decision to sleep in the car).

You can never really tell how a film will play out from the cherry picked trailers. After the great set up and high caliber jokes up front I had a doubt after Phillips’ scene that they would have trouble keeping up the humor. Thankfully, Due Date had loads of humor to throw at us leaving very little which felt thin or forced.

Aside from Zack’s androgynous and hysterical charming incompetence, the real “wow” factor in the film (aside from the noteworthy humor) is how close Ethan and Peter (Zack and Jr.) despite the glaring incompatibility up front. Pratfalls are surprisingly few and both lunacy and and esoteric jokes pave the way from Atlanta to L.A. (or Hollywood as Ethan calls it). For you fans of Trains, Planes, despite the apparent similarities, Due Date stays clear of being a sly remake but more importantly stands on it’s own…especially with some crowd pleasing highway vehicular mayhem. All in all, if you can find a good friend in the last place you’d ever look, then sometimes you just need to have your taxi’s door ripped off on the way to the airport.

While it’s hard to separate the premise of this film from Trains, Planes (maybe that’s just my unrelenting bias) it really doesn’t become an issue after the first 20-30 minutes or so as the similarities die off. But if you like a good road trip movie, a buddy flick or just want to see if Phillips can sufficiently top The Hangover, this is bound to please. I’d call this just as unexpectedly entertaining as Get Him to the Greek (in which I had looow expectations going in). Yet while it’s tough to keep my mind from imagining seeing Steve Martin and John Candy in this film I’ll close by saying that Due Date has half the heart of Trains, Planes but twice the humor. 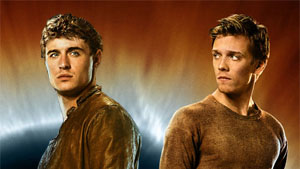