The written word is a poor medium for articulating Gravity‘s many wondrous qualities neatly and efficiently; more than any other film released in 2013, this one – hailing from virtuoso Mexican filmmaker Alfonso Cuaron seven years after the monumental Children of Men – may be best described as an experience. That’s a pretty way of saying that Gravity demands to be seen in a properly calibrated theater, which is itself a passive aggressive, mildly pleading clarion call for all bored moviegoers to bum rush their local multiplexes and ruthlessly run box offices out of tickets stubs for the picture. More so than other mainstream contemporary spectacles, the film must be seen – in 3D, no less – to be understood. Which leaves critics in something of a bind, because keyboards, WordPress blogs, and zippy modem speeds only allows us to express so much of what makes Gravity so remarkable. Few films manage to be this transporting, this thoughtful, this stunningly beautiful, and this flat-out daring all at the same time; Cuaron achieves the turkey and lends his work a bent of such meticulously inventive ease that he makes many of his blockbusting contemporaries look like utter clowns by consequence. Why can’t all cinematic thrill rides look this striking, work this seamlessly, and present rich meaning all at the same time? The simple answer, of course, is that there’s only one Alfonso Cuaron, but pointing out reality feels a bit like poor sportsmanship.

Here, Cuaron turns away from the post-apocalyptic trappings of his last effort to tell a story that’s simultaneously more and less grounded. Gravity occurs in our world, but it’s set in outer space; “grounded”, then, may be a misnomer, but the narrative stuff of the film proves much less misleading. A routine shuttle mission, crewed by veteran astronaut Matt Kowalski (George Clooney), medical engineer and first time space traveler Ryan Stone (Sandra Bullock), and one hapless red shirt, gets thrown off-kilter by a violent, unruly debris field, leaving Stone and Kowalski stranded in the black with limited oxygen, no shelter, and no means of returning home. Think Open Water, minus the sharks, plus the suffocating vacuum of space.

That comparison almost feels silly on its face, if not outright degrading; pound for pound, the stupidity of people cannot compare in the slightest to the harsh and wholly arbitrary callousness of the universe. As a preface to his film, Cuaron helpfully lists out the various environmental extremes associated with space travel, though he stops short of listing out in total the endlessly terrible ways a person can buy the farm while dallying about in zero gravity. This is, perhaps, because he intends on threatening Stone with the danger of facing most of them, often all at once and without giving her a moment’s reprieve before the next lethal onslaught of hurtling junk. If the cosmos are unforgiving, they have nothing on Cuaron. Cinephiles will, immediately and without much variance, go straight to movies like Apollo 13 and 2001: A Space Odyssey in a race to peg Cuaron’s inspirations, and yes, Gravity sits comfortably alongside them for all of its bravura, groundbreaking FX wizardry and for the verisimilitude of its depictions of living in space. But he owes perhaps as much to Ray Bradbury as to Kubrick and Howard for Gravity‘s soul; although this is a film that’s absolutely about dazzling gear-head marvels, it’s Cuaron’s emphasis on the trials his characters endure that gives the picture a soul. Savvy readers may detect notes from The Illustrated Man – think “Kaleidoscope” and “The Rocket Man” – throughout the struggle for survival that makes up Gravity‘s substantive bones. Internal existential discourse pairs perfectly with marooned protagonists flailing helplessly through the ether.

The point isn’t simply to mimic and replicate the sensation of weightlessness, though that’s undeniably one of Gravity‘s goals; rather, Cuaron employs the conceit to measure the weight of a person’s life. Whether the former or latter element occupies a greater space in his heart is a mystery, but anyone with even scant familiarity with his work can guess that he’s fascinated with his gadgets and toys only as a means to an incredibly human, deeply theological end. Gravity thrills. In the pursuit of those thrills, the picture becomes a pastiche of interwoven contradictions – nihilistic yet hopeful,spiritual yet irreligious, metaphysical yet mired in tangibility – that revolve around what’s essentially a two-man show where Bullock and Clooney take center stage. There are random voices to account for here- notably, Ed Harris lends his dulcet tones to proceedings – but they have the luxury of steering clear of boththe endless array of FX rigs used to architect Gravity‘s mis-en-scene, and the puppeteers charged with  manipulating the actors’ bodies. For all of the outside influences that dictate their movements, Bullock and Clooney create portrayals that feel surprisingly unfussed; even as they spin through the void, always caught in the long, unbroken takes that are Cuaron’s trademark, neither gives a single beat that’s anything less than natural. Their alternating terror and stoicism all feel completely, shockingly real, a necessary layer that helps fasten the illusion Cuaron, cinematographer Emmanuel Lubezki, and visual effects supervisor Tim Webber all cast in tandem.

It’s Bullock, by circumstance commanding most of Gravity‘s attention, who floats to the movie’s forefront; without mincing words, she’s flat-out amazing. Clooney does his part, injecting the sort of gregarious, masculine charm that’s so much his brand into each scene, but as he flits in and out of the telling of the tale, Bullock becomes Gravity‘s focal point. As Stone, she runs a Kubler-Ross gamut of emotions, though not with any assumed order, and proves so efficacious at depicting each of them that it’s hard to believe how many actresses Cuaron went through before finally coming around to her; maybe he just saved the best for last.

If Gravity succeeds through raw performances and superior thrills, it may also appear to grant concessions towards story. The film neither grows complicated beyond its initial set-up, nor twisty or enigmatic; characters go into space, characters get stuck in space, characters must use all their cunning to persevere in space. Reducing critique to a single word, Gravity is simple. But in its simplicity it documents the power of our drive to live, and what we’re willing to suffer through to preserve it. It’s the quietest aspect of a production that’s sure to be lost in the shuffle of Cuaron’s and Bullock’s dominant contributions, but one that should stick with harrowed viewers as much as its technological triumphs. 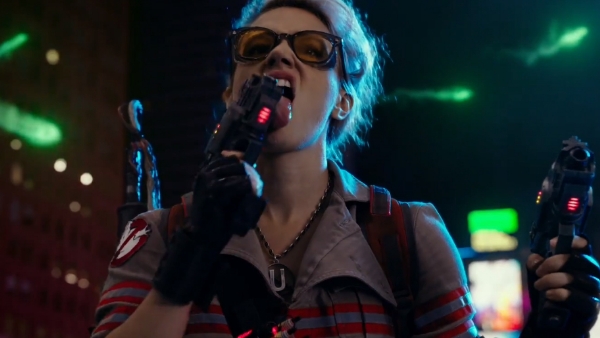