There’s a lot to like about the first trailer for Ender’s Game, Gavin Hood’s adaptation of Orson Scott Card’s beloved, iconic, and utterly important science fiction novel; it’s big, it’s grand, and it looks to appropriately capture the gravity of the narrative’s scope. Maybe the most awe-inspiring note here isn’t in the footage itself, but from the story surrounding the project. It’s hard to believe that after years of being told that Card’s book- which focuses on gifted children being trained by the military to combat an alien menace- is unfilmable, audiences of both fans and the uninitiated alike are finally going to get to see his vision on the big screen (though there are always going to be people who would rather that vision stay on the page).

We also get to see a whole lot of Harrison Ford. Admittedly, Ford’s character- Colonel Graff, the man leading that aforementioned military training exercise- is a big deal in the narrative, but the amount of screen time he receives kind of de-emphasizes the fact that the children talked about in voiceover are the real stars. (And despite how much he’s featured, the trailer doesn’t really give a sense of his relationship to Ender, our eponymous hero.)

Of course, this is just a two-minute chunk of footage designed to show off the effects and establish the impressive, Oscar-caliber cast for people unfamiliar with the production and the property, so there really isn’t room for any of that. Could be that we’ll see more in a full trailer later on in the year. In the meantime, this is what we’re left with, and misgivings aside it does look like it has potential for greatness despite the disproportionate amount of Ford on display here compared to the amount of Asa Butterfield (who reunites with Hugo co-star Ben Kingsley, seen here with his character’s awesome Maori face tattoos).

Check it out below:

And here’s the full synopsis:

In the near future, a hostile alien race called the Formics have attacked Earth. If not for the legendary heroics of International Fleet Commander Mazer Rackham (Ben Kingsley), all would have been lost. In preparation for the next attack, the highly esteemed Colonel Hyrum Graff (Harrison Ford) and the International Military are training only the best young minds to find the future Mazer.

Ender Wiggin (Asa Butterfield), a shy but strategically brilliant boy, is recruited to join the elite.  Arriving at Battle School, Enderquickly and easily masters increasingly difficult challenges and simulations, distinguishing himself and winning respect amongst his peers. Ender is soonordained by Graff as the military’s next great hope, resulting in his promotion to Command School.  Once there, he’s trained by Mazer Rackham himself to lead his fellow soldiers into an epic battle that will determine the future of Earth and save the human race. 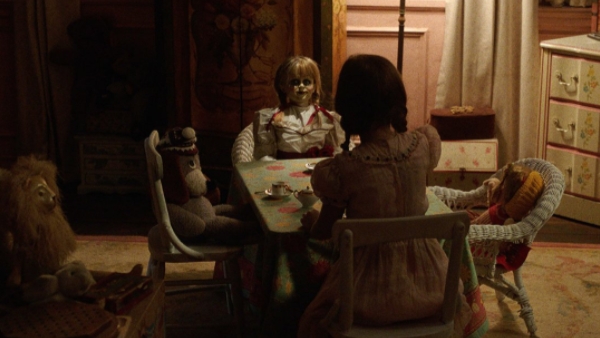